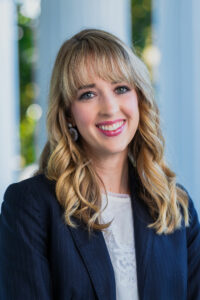 Drew is a partner at Langdale Vallotton, LLP, and her practice focuses on representing individuals who have been injured, harmed, or suffered a loss through the wrongdoing or negligence of another. Unlike many attorneys who dabble in the area of personal injury, Drew is a trial attorney who has exclusively practiced in this field for her entire legal career in both Georgia and Florida and specializes in representing catastrophically injured victims, families who have lost a loved one, as well as individuals injured in motor vehicle collisions, tractor- trailer crashes, motorcycle accidents, medical malpractice, defective products, unsafe premises, and other hazardous conditions. Drew aggressively pursues each case with the intent of reaching the strongest possible outcome for her clients and she understands that sometimes recovery requires fighting for the compensation clients deserve and she is a fierce advocate who rises to that challenge. Not only is she an experienced litigator, but she is equally experienced in negotiating settlements and has recovered millions on behalf of her clients. One important component of Drew’s practice is that she excels at providing clients with individualized attention and is actively involved in every aspect of her client’s cases, from the initial client interview through the final resolution of the legal matter.

In 2005, Drew graduated from the University of Georgia’s Terry College of Business with a Bachelor of Business Administration in Finance and then attended Florida Coastal School of Law where she would become one of the most decorated members of the nationally-ranked Moot Court Honor Board. She graduated in 2012 and is licensed to practice law in all trial and appellate courts in both Georgia and Florida. She is also admitted to practice before the United States Court of Appeals for the Eleventh Circuit, the Supreme Court of Georgia, the Court of Appeals for the State of Georgia, the United States District Court for the Northern District of Georgia, as well as the United States District Court for the Middle District of Georgia.

Drew is a member of the State Bar of Georgia, State Bar of Florida, Valdosta Bar Association, Georgia Trial Lawyers Association, Georgia Women Lawyer’s Association, and the Georgia Judicial Applicants Review Committee. She is also an active member of the Valdosta Junior Service League through which she has volunteered her time and services to many of the organizations in the local community to improve the cultural, welfare, recreational, civic, and educational conditions within Lowndes County. In addition to her membership, Drew has also served on the Executive Board of the Valdosta Junior Service League as the President-Elect, Long-Ranging Planning Chair, and has been elected to serve as President next year. Drew has also devoted her time to Leadership Lowndes and attends Adel United Methodist Church. She currently resides in Valdosta, Georgia, with her husband Daniel, and their three children, Reese, Jack, and Kate.